https://www.duelingbook.com/replay?id=200963-10215645
Im playing six samurais and i have 2 great shogun shiens out yet they think they can use 2 spells in the same turn. they activated the spell card ledger of ledgermain, and then tried playing terraforming. this is my issue with people on here they cant read!!!!
Top 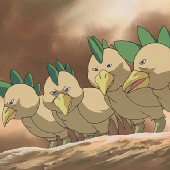 I know this sub-forum is meant for spamming and stuff and not to be taken too seriously, but you sure take some things seriously enough to the point of controversy or even hypocrisy. One of your older posts started with:

CrystalMusic wrote:all i see are decks that spam summon like crazy. i HATE decks that summon more than once or twice in a single turn. it ruins the game for me. its no fun if you lose in one turn.

And then you use Six Samurais, more specifically The Legendary ones, whose spam summons and card control are well known since the days of 5D's. This could be considered either hypocritical or improvement, but I'm not going to judge that. Instead, I decided to check the replay you provided and noticed that your opponent left as soon they realised there was no way they could win with a rogue deck like that. Facing that was already experience enough for that casual player to improve their deck and continuing in that duel wouldn't be fun, nor productive.

Of course, quitting like that is rude, but your alleged issue was that they can't read, instead of the (rage)quit. What it would change? You can see from the replay you provided that they couldn't do a thing against your field and would lose in the very next turn. Victory was defined in a single turn even if Great Shogun Shien didn't have that effect.

That aside, quitting for barely no reason and not reading properly important texts for gameplay and game state is something I have personally seen YOU doing. Sure, maybe you hate other people doing that as an extension of your own actions. However, failing in acknowledging that and spam posting pointless stories like this leads to little to no self improvement.
Top

ok i only run six sams every now and then, i preffer to run my water deck or my dragons of atlantis. If i get bored of all my other decks i run my six sams
Top

CrystalMusic wrote:ok i only run six sams every now and then, i preffer to run my water deck or my dragons of atlantis. If i get bored of all my other decks i run my six sams

That hardly helps your case, but whatever, I guess, right?
Top

Users browsing this forum: No registered users and 46 guests